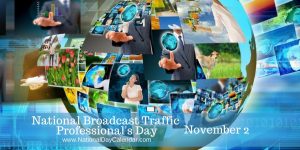 Each year on November 2, unless that day falls on a weekend then it is observed on the following Monday, it is National Broadcast Traffic Professional’s Day.

This day honors those in all radio and television traffic departments, who schedule and work very diligently with programs, announcements and much more, on our nation’s broadcast stations.

The first commercial broadcast took place on KDKA radio out of Pittsburgh, Pennsylvania on November 2, 1920.  Also known as National Traffic Directors Day or National Traffic Professional’s Day, it honors the thousands of professionals directors in broadcast media since that day who have worked behind the scenes keeping the entertainment, talk shows, news and commercials flowing.  Through breaking news alerts, stormy weather, budgets and differing personalities, these men and women maintain program development.

Thank a traffic director and use #TrafficProfessionalsDay to post on social media.

While our research did not reveal the founder of National Broadcast Traffic Professional’s Day, the day commemorates the first commercial broadcast in the United States on November 2, 1920.  Also, the Traffic Directors Guild of America is a strong supporter of this annual celebration and recognizes traffic directors and their over 30 titles that are acknowledged in the business.

-There are over 1,500 national days. Don’t miss a single one. Celebrate Every Day with National Day Calendar!