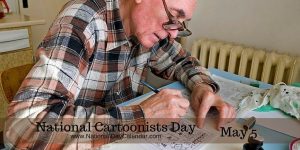 Observed on May 5, it is National Cartoonists Day.  This day honors all those creative ink-stained artists, past and present, the fascinating pieces they have created and the humor they have brought into our lives.

American comic strip writer and artist, Richard Outcault (January 14, 1863 – September 25, 1928) is considered the inventor of the modern comic strip.  At 15 years of age, he studied for three years at the McMicken University’s School of Design in Cincinnati.  Outcault is the creator of The Yellow Kid and Buster Brown.

It was on Sunday, May 5, 1895, that the readers of the New York World discovered an exciting new addition to their morning paper.  Inside was Outcault’s full-color drawings featuring a big eared, barefoot little boy with a mischievous grin.  The first color installment of the cartoon called Hogan’s Alley would later become known as The Yellow Kid and was the first commercially successful cartoon icon.

Outcault was a 2008 Judges’ Choice inductee into the Will Eisner Comic Book Hall of Fame.

Enjoy your favorite cartoon and use #NationalCartoonistsDay to post on social media.

– There are over 1,500 national days. Don’t miss a single one. Celebrate Every Day with National Day Calendar!